The 170 km of trails called 60 km della Vigolana, opened in June 2011, are an articulated network of trails suitable for a relaxing walk from town to town, trekking up to the toughest of Becco di Filadonna – La Vigolana’s highest peak with its 2150 meters, Nordic walking tours, mountain biking or horseback riding.

Each discipline can be practiced alone or accompanied by guides who will guide you to discover the most beautiful and remote parts of our territory.

The Equestrian Center Maso del Sole, an affiliate of FISE, organizes English riding lessons, activities for children with ponies and equestrian rehabilitation. The Center is situated at Doss del Bue, at about 4 kilometers from the center of Vattaro.

The Acropark is located inside the park on the river Centa, in a picturesque and wild setting. Various aerobatic paths are offered to adults and children in complete safety (there are in fact instructors providing participants with the harness), with loads of fun and tranquility of nature. www.acropark.it

Adjacent to the Hotel Dolomiti is a public park with a playground for children and a multi-purpose sports field.

For more information about mountain guides, instructors of Nordic walking and mountain biking, or horseback riding, please contact us

The charming landscape of the Plateau Vigolana, enclosed between the Vigolana and the Marzola massifs and is characterized by large meadows and forests, which remained unchanged over time and is a natural balcony from which to admire the Alpine landscape and the Lake of Caldonazzo. Vattaro is located on the morainic terrace at the foot of the Doss del Bue – The Ox Hump (in dialect: Dos da Bugo), at an altitude of 700 meters. It is an excellent starting point for diving in the discovery of the Trentino Province and the Veneto cities of Verona and Venice within easy reach by car or train.

The Bortolazzi Palace is one of the most important and ancient buildings of Vattaro: it is located in the historic town, next to the municipal theater and is currently home to the school and library. The building dates from the late eighteenth century with its cylindrical tower and loophole under the spire. It contains frescoes by Antonio Obermuller Erasmus (Il Pistoiese) depicting moments of rural life. In the library hall, there are four paintings portraying water, air, earth and fire. Adjacent to the Palace stands the Church of San Rocco, which was restored by the Counts Bortolazzi when they built the Palace.

The Church of San Martino, the town’s patron saint and is located at the eastern end of town. The first evidence of the existence of this church dates back to 1370. The external appearance was completed in the early 18th century and in later years, the sanctuary, the sacristy and the bell tower were modified and expanded. In the 19th century, other renovations funded by the Bortolazzi Family were made. Internally the building is of simple structure, with only one nave, worthy of note is the marble altar dating from the 18 th century, carved by masters Andrea Lucchi and Valentino Villa, both natives of Trentino. On the side walls and the dome of the presbytery, there are a number of frescoes depicting the Madonna and the Saints. Vatten is a land of rural tradition: from there came the caradori, carters who transited between Trento and Feltre to sell fruits and timber. 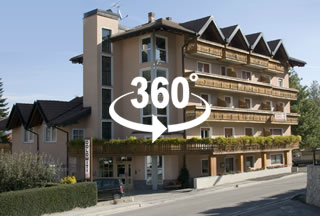